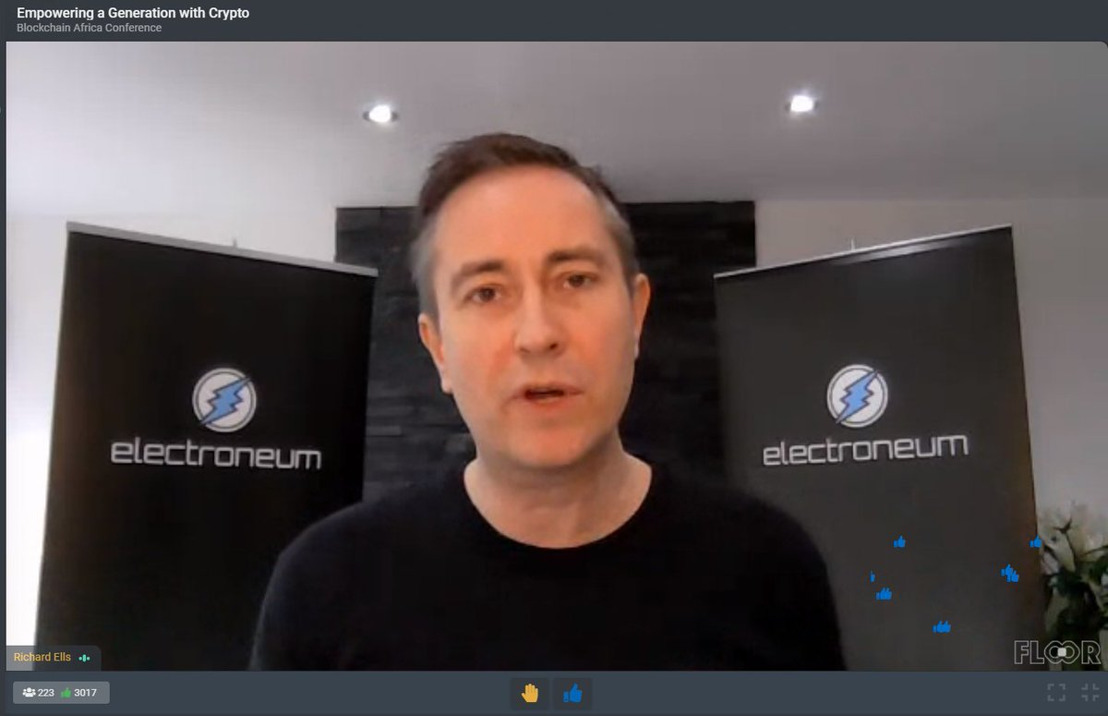 Mr. Ells’ speech to thousands of BAC2021 attendees was entitled “Empowering a generation with crypto,” which is what Electroneum and AnyTask.com have focused on since inception in late 2017 and late 2019, respectively.

Very few blockchain startups have achieved what Electroneum has with AnyTask.com, enabling thousands of online freelancers worldwide to earn cryptocurrency, Richard Ells said. And even fewer crypto startups have unlocked the global digital economy for the world's unbanked, which in April 2018 were 1.7 billion, according to the World Bank’s most recent report.

More specifically, cryptocurrencies like Electroneum have empowered our generation with global peer-to-peer transactions at an extremely low cost, he added. He highlighted how crypto and the Internet are similar because both have made the world a smaller but better place with almost instant global connectivity.

While banks do allow for electronic transfers, they can take considerably longer and are simply not practical for smaller amounts, noted Mr. Ells. “It simply would not make sense to send $5, for example, from the UK to Nigeria or from New York to Senegal without the cost of that transfer being significantly higher than the amount sent,” he added.

However, Electroneum, Mr. Ells reiterated has empowered people to send any amount of ETN, large or small, instantly instead of days. That is empowerment, no doubt.

“When we first launched Electroneum back in 2017 …  We thought if we build the (mobile phone) infrastructure of the payment mechanism, that people would immediately start to use it. And we certainly had more real-world use probably than most other projects out there.”

Mr. Ells recalled that for the first 30 months after its launch, Electroneum managed to bring in millions of users to the world of crypto who may have not gotten involved otherwise. And they got into cryptocurrency because of how easy it was to earn virtual currencies by mobile phone simulated mining.

The UK-based and award-winning crypto has users in practically every country around the world. In Africa, there are nearly 250,000 registered users, which is about 5% of Electroneum’s total user base, and that number is growing daily.

Richard Ells pointed out that Africa has the youngest population in the world. “I think it's got nearly a quarter of a billion people between 15 and 24 years old. So this is a great place … a hugely important place in terms of cryptocurrency.”

A recent report based on World Bank and United Nations data shows that 10 African nations top the list of the countries with the youngest population. “Young countries have significant opportunities ahead of them. A younger population means a larger upcoming workforce and more opportunities for innovation and economic growth,” the report adds.

Mr. Ells also pointed out that Africans are highly entrepreneurial. “Their spirit of entrepreneurship is incredible. And so, they see the opportunity of crypto.”

Their business-driven spirit has been observed on AnyTask. The numbers prove this point. There are over 57,000 AnyTask users across 54 African countries, representing 8.5% of the total user base that totals nearly 671,000.

Electroneum is building its very own ETN crypto ecosystem. Already, their 4.2 million registered users can top-up their airtime and data in 163 countries. Electricity top-ups from within the Electroneum app are also possible in nine African countries, including Nigeria, and that is expected to expand.

Electroneum users can find 2,147 merchants globally on ETNeverywhere.com, and new merchants are signing up to the Electroneum directory weekly.

More use cases are in the process of being integrated into the Electroneum App and will be made available publicly in the coming months.

As a guest speaker at the BAC2021, Mr. Ells touched on other very interesting topics, including where the cryptocurrency industry is today. We hope to see Mr. Ells at more events in the future.