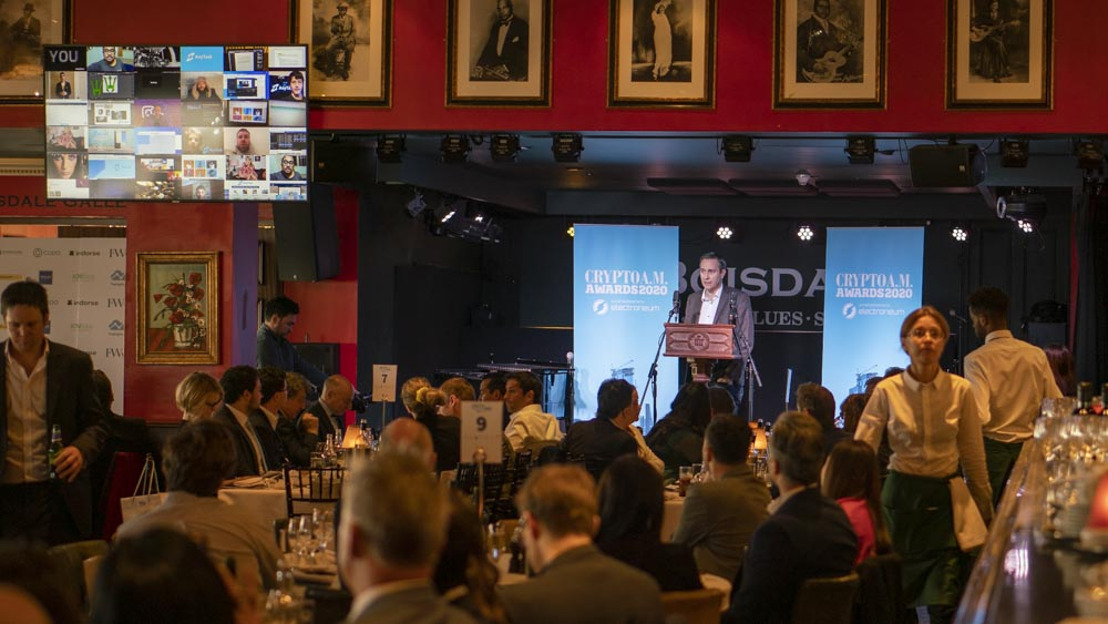 The show must go on, and so City AM’s Crypto Awards did despite the increasing COVID-19-related cancellations across the UK and around the world. James Bowater, the head editor of the city’s most-read business newspaper’s Crypto Insider edition, hosted what he said are the first of many Crypto Awards to come.

“I am really thrilled to see you were all able to make it despite the trying times,” said Mr. Bowater to an audience of about 200 crypto and blockchain entrepreneurs, experts, and influencers. He recalled that Crypto Insider’s journey began two years ago and has so far been “astonishing.”

The Lord Mayor of London William Russell was also present and delivered a humorous speech saying that being the 697th person in any role was not so cutting edge and that the first Lord Mayor appointed by Richard the First in 1198, Henry Fitz Ailwin, would have thought blockchain was some sort of new castle defense system.

On a more serious note, the Lord Mayor thanked City AM for supporting the Crypto Awards and emphasized that London is a world leader in financial innovation.

“We are the world hub for tech talent,” he added. “We have generated over 76,000 FinTech jobs and closed deals in the sector worth more than £2.9 billion in 2019, which helps us support regulation standards globally.”

The Lord Mayor said the London’s talent and global leadership in innovation “are reflected here today at the Crypto Awards,” which he said are the first of many more to come.

The buzz, the hype, and the energy were overwhelming, and the expectations that grown for weeks before the event was coming to its climax as Electroneum CEO and Founder Richard Ells took the stage to deliver his speech before the awards ceremony’s attendees.

He explained how cryptocurrency could help make a difference in a world where 1.7 billion people are unbanked, and half of the global population has difficulties accessing the digital economy.

“Electroneum, for example, has made it easy for people to earn cryptocurrency and through our AnyTask freelance platform that does not require sellers of tasks to have a bank account, hundreds of people are now supplementing their income. We’ve created a whole new way for people to buy technical skills at ridiculously low prices.”

Mr. Ells spoke of the over 40,000 people who have signed onto AnyTask as sellers since the 2019 launch and spoke of the benefits to users who are unbanked and therefore do not have access to any other freelance platform.

“There is a logo designer in Pakistan. He is unbanked, so he cannot use Fiverr. He is disabled, struggles with work, and he’s so excited to be on AnyTask,” Mr. Ells went on to say. “He’s been really busy since AnyTask went live, his skills are superb and charges only US$10 for a logo design. He is only one of loads of stories of people in developing countries who are benefitting from AnyTask.”

The 11 March 2020 Crypto Awards in London are a clear demonstration that cryptocurrency and blockchain are revolutionising the financial sector in a way that not even a global pandemic can stop.