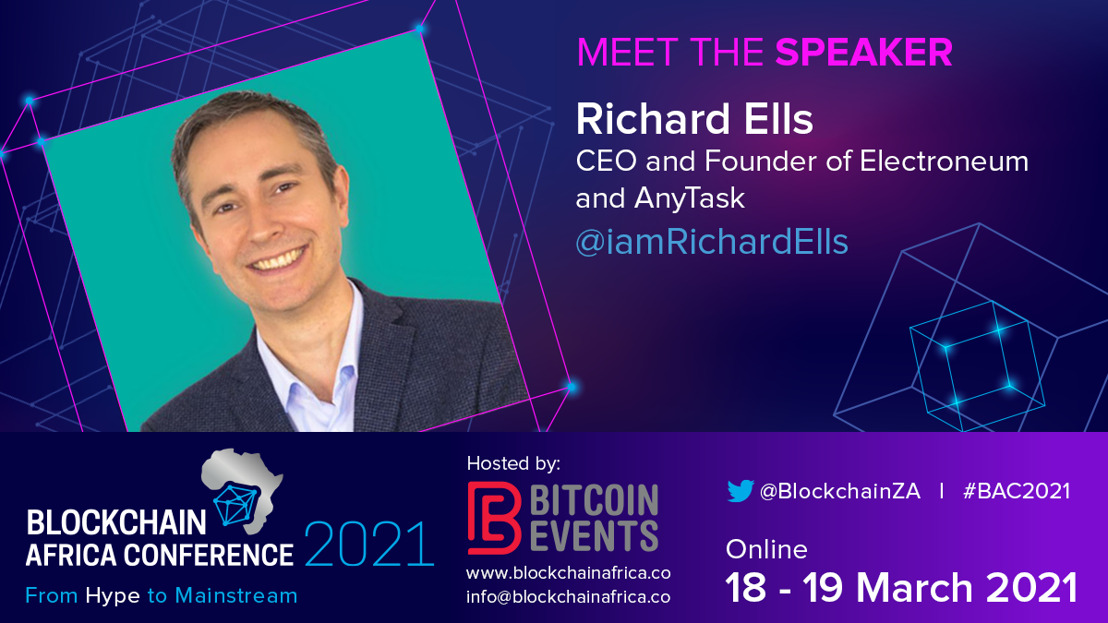 The past week was significant for Electroneum CEO and Founder Richard Ells as he prepares to address the Blockchain Africa Conference 2021, to which he was invited as a guest speaker.

Richard Ells is scheduled to address the conference on Friday, 19 March at 07:35 GMT. His speech – Empowering a Generation with Crypto – focuses on how crypto and blockchain have the power to change lives. He'll also give insight into how the revolutionary technology can help generate prosperity in local communities worldwide and empower people in remote and underserved areas globally.

Crypto and blockchain, says Mr. Ells, has the potential to unlock the global digital economy for the world's unbanked. Don't miss the event, and make sure you are there for Richard Ells' speech.

Head of Marketing Cathy Jenkins said a new AnyTask TV ad is scheduled to air across South Africa reaching millions of viewers from 18 March to 17 April. She explained that AnyTask.com has experienced a surge in interest from buyers and sellers in the African country.

Electroneum is pleased to announce its working in collaboration with ARK to promote its new project called MarketSquare. The new website aims to bring together crypto and blockchain projects to build and collaborate.

ARK said they are pleased to work with Electroneum and other crypto and blockchain startups to not only help make MarketSquare  become the new homepage for the decentralized web but also create inroads between ARK and other projects looking to build and collaborate.

Mr. Jennings also informed Electroneum has exciting work-from-home employment opportunities for more PHP developers and a Head of Development. "Please check out our careers page if you want to be part of our great team."

READ: The History of Non-Fungible Tokens

Electroneum now has 4,187,439 registered users after a week, during which 7,382 new users signed up. The App downloads continue higher than new registrations as former users return to Electroneum and re-install the application on their mobile phones. Nearly 1,400 App downloads per day were completed the past week, bringing the total to nearly 2.87 million.

Electroneum users in different regions completed 1,278 mobile top-ups this past week, bringing that total to 228,136. ETNeverywhere.com has six newcomers. That means there are now 2,124 merchants worldwide that accept ETN as payment.

Don't forget to sign up to AnyTask as an NFT artist

READ: Electroneum teams up with Blockchain Heroes, ventures into the world of NFTs

Mr. Marriott called on digital freelancers with drawing, painting, illustrating, and animating skills to sign up now as a seller on the AnyTask.com freelance platform and list their NFT task.

READ: All about NFTs, their history, the market, and why Electroneum got involved

Freelancers with architecture, video, music, and 3D rendering skills should also list their NFT task taking advantage of this ground-floor opportunity, he added. If you are already an AnyTasker, then go to "Create a Task" and list yours now.